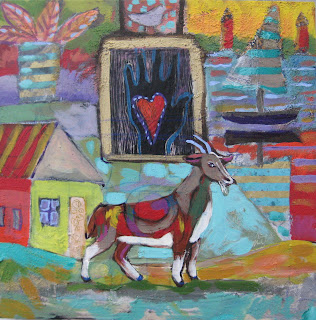 I am done with the 4 panels that I prepared-  have had fun with these
thanks for all your title suggestions from yesterday- heres a few..
"imagine"
"vermillion tips"
Showing the pear tree to the partridge"
"a little bird told me"
"?"
Maybe I will string them all together like-
"Imagine- vermilion tips the partridge and pear showed me?"
LOL
Posted by Sally Dean at 5:56 AM No comments: 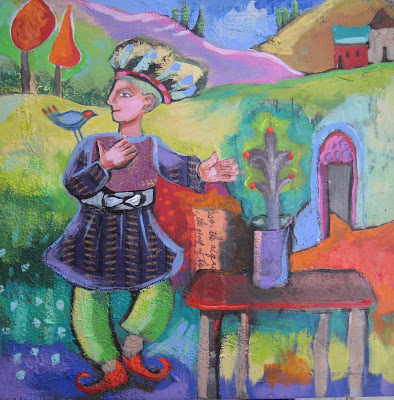 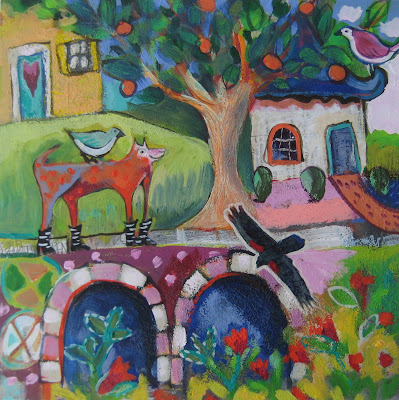 To be shown with other similar pieces at Native in Scituate  harbor opening Friday March 4.
Posted by Sally Dean at 7:04 AM 1 comment:

Im not really a skiier- but I own cross country skiis. Today after a little painting and shoveling I went out to the Norris Reservation in Norwell for a bit of a ski.
I got there only to find I had brought the wrong skiis! Retuned home and grabbed the right pair and went back.
It was worth it- the woods were magical in the sunlit snow- and I made a nice loop down to the river and marveled at the quiet and beauty of the place. Now I am tired and feel great,lets see how I feel tomorrow! Here are two works in progress- both 10"x10" acrylic and mixed media on cradled panels.

yes, birds are in them!
Posted by Sally Dean at 2:36 PM No comments:

today is my 5th day of work missed because of snow. YAY!
I can work at home however, and plan to paint too!
I really miss my flower a day challenge- so I have embarked on a 30 day challenge of birds!
This is one I have been working on- I think it's almost done.
Posted by Sally Dean at 6:53 AM No comments:

this was touched up a lot...started it last year.

yet another snow day!

I am up to 4 missed days of work- I was supposed to be with kids at the mueum today but they cancelled- bummer in a way - but this is awesome! I love working in my studio on snow days- I have none of the pulls of summer- I just hunker down and work. Ahhh. I worked on a few pieces  and took a couple of walks in the snow. It's a little deep for my short dog- she had to hop through the snow!
Skiing was on my mind, but I ended up building a little igloo for my penguins instead.

Im working on a couple of mosaic bowls

my 10" by 10"- almost done!
Thanks for all your support and kind words yesterday- it really is great to have you all to share this stuff with- and I find I am not alone!
Posted by Sally Dean at 4:59 AM 3 comments:

Every year the Duxbury Art Association puts on the Winter Juried Show -it is hung in the museum where I work. There are usually around 450 entries, just over 100 make it in.
I would say I get in about 40 percent of the times I enter. The process is grueling and I hate the whole idea of someone judging me.
My dear friend Carol told me to pray for acceptance- and she meant self acceptance, for even if the judges reject my work ( my soul!) I have to know inside that I believe in what I am doing. She is so right. I know many fantastic and successful artist who never enter juried shows- it just is not worth it.
I'm thinking it might be the last one I enter. 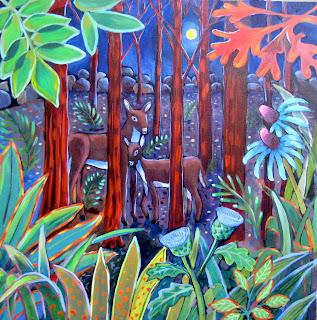 As it turned out- I did get this one in. I'm not going to lie- I'm  happy. But let me tell you- it is still my own self acceptance that needs to be my focus.

This was generated from the Native American legend about how the crow saved that animals from being buried in the snow.  The crow flew up to the sun and delivered fire back to the land, but he burnt his rainbow colors in the process- so now he is black.
Posted by Sally Dean at 6:55 PM No comments:

'somewhere out there' 10'' X10" acrylic and collage on panel

I am going out to my studio NOW to try to get some of the 7 started panels done... this one too.
Its snowing- I made espresso. Life is good.
Posted by Sally Dean at 5:25 AM 3 comments: 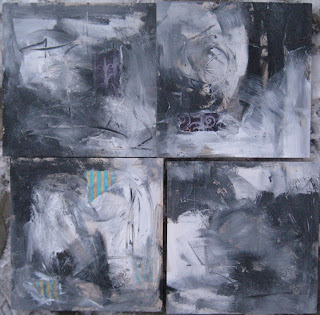 these are 4 10"x 10" cradled birch panels I am distressing with black and white gesso, sand and collage. 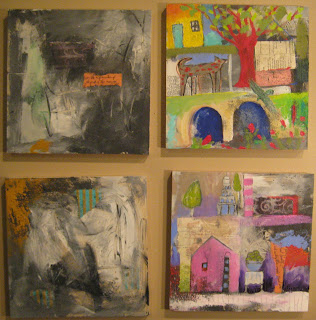 I am loving working this way, completely intuitively- the image evolves organically. 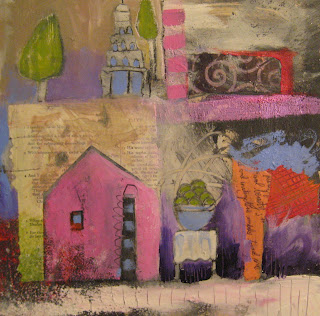 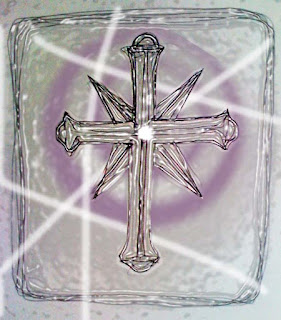 Scientology is a body of beliefs and related practices created by L. Ron Hubbard (1911–1986), starting in 1952, as a successor to his earlier self-help system, Dianetics.[4] Hubbard characterized Scientology as a religion, and in 1953 incorporated the Church of Scientology in Camden, New Jersey.[5][6]
Scientology teaches that people are immortal beings who have forgotten their true nature.[7] Its method of spiritual rehabilitation is a type of counselling known as auditing, in which practitioners aim to consciously re-experience painful or traumatic events in their past in order to free themselves of their limiting effects.[8] Study materials and auditing courses are made available to members in return for specified donations.[9] Scientology is legally recognized as a tax-exempt religion in the United States and some other countries,[10][11][12][13] and the Church of Scientology emphasizes this as proof that it is a bona fide religion.[14] In other countries, notably France, Germany and the United Kingdom, Scientology does not have comparable religious status.
I'm done with this study. Moving on to another challenge. ( tbd)
Posted by Sally Dean at 7:02 AM 1 comment:

next to last religion study- RASTAFARIAN 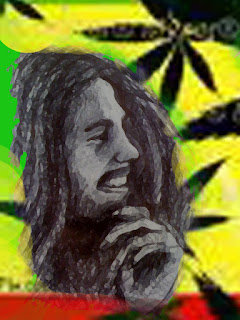 Rastafarian: Because of the loosely-organized structure of Rastafarianism, and because many Rastafarians are nominal but non-participating members of larger religious groups, precise size estimates are difficult. We've seen total world estimates of about 200,000. We've seen an estimate of 700,000 in a couple of places. Leonard E. Barrett, author of The Rastafarians, estimates there are 800,000 Rastas worldwide, more than 2 million if one counts followers of the lifestyle but not the faith. Based on other data we believe a figure as high as this would have to include many Jamaicans who are strong Rastafarian supporters or enthusiasts, but who are also at least partially or nominally adherents of mainstream Protestant and Catholic denominations as well.
(and from wikipedia)The Rastafari movement encompasses themes such as the spiritual use of cannabis and the rejection of western society, called Babylon (from the metaphorical Babylon of the Christian New Testament.) It proclaims Africa (also "Zion") as the original birthplace of mankind, and embraces various Afrocentric social and political aspirations such as the sociopolitical views and teachings of Jamaican publicist, organizer, and black nationalist Marcus Garvey (also often regarded as a prophet).

Rastafari is not a highly organized religion; it is a movement and an ideology. Many Rastas say that it is not a "religion" at all, but a "Way of Life".Most Rastas do not claim any sect or denomination, and thus encourage one another to find faith and inspiration within themselves, although some do identify strongly with one of the "mansions of Rastafari" — the three most prominent of these being the Nyahbinghi, theBobo Ashanti and the Twelve Tribes of Israel.
I did this at the hairdressers with a ball point pen from an image i googled on my phone.
15 minutes was all I had.
Then I photoshopped it , and added the background.
It's Bob Marley.
Posted by Sally Dean at 9:33 PM 1 comment:

We had a rip roaring storm today. I was in heaven, everything was closed.
A gift of time. Al shoveled, Markie cooked  I played with my new neighbor Katina.
I painted this from her living room window. 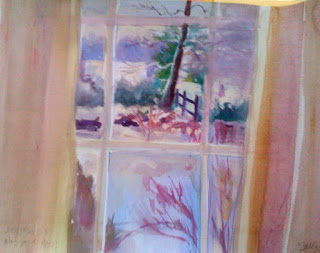 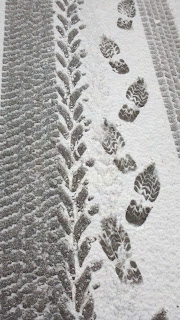 tracks on the street... 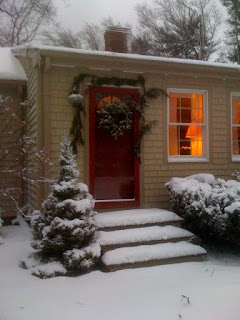 my cozy house- we had no power till 2:30 but a gas fireplace and my gas heater in my studio was perfectly warm.. heavenly and  quiet. 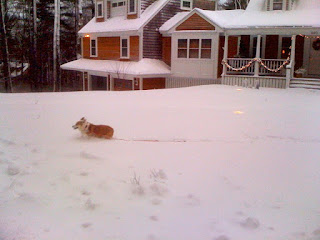 Winnie racing across my brothers yard.
Posted by Sally Dean at 5:46 PM 3 comments:

I will be teaching on alternate wednesdays in my studio- if anyone is interested in learning glass mosaic - please contact me. 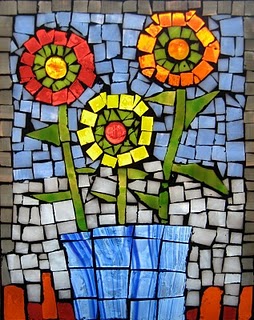 Class is from 6-9 PM, starting January 19 , $25 includes all materials.Depending on the size of the piece it might take 2 sessions to complete.
This is one I did last year.
Thanks for looking!
Posted by Sally Dean at 8:35 PM 1 comment: 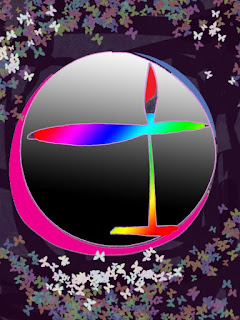 Unitarian Universalism became organized as a religious group in 1961 with the establishment of the Unitarian Universalist Association (UUA), a consolidation of the American Unitarian Association, established in 1825, and the Universalist Church of America, established in 1866. It is headquartered in Boston, Massachusetts, and serves churches mostly in the United States. The Canadian Unitarian Council became an independent body in 2002.
Again I thank Wiki for all the info.
Also Photoshop for the fun tips and tricks-
( I am a toddler on PS!)
Posted by Sally Dean at 7:15 AM 2 comments: 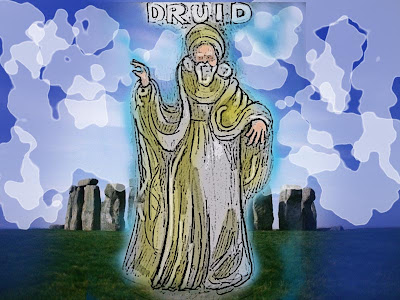 This was fun to do.Started with a simple pencil sketch, layered over a stonehenge photo I googled, then used artistic filters and erasers and special effects brushes.
Fun and clean!
Posted by Sally Dean at 8:00 AM 1 comment: 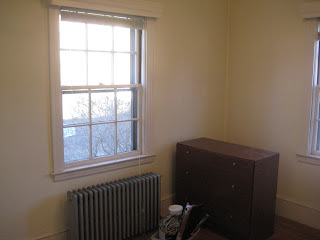 My nephews room in Rhode
Island-  (before)-my family went down to do
"extreme home makeover" while the boys were in school.
We got mistint paint at Lowes and made our own color, one gallon was more than enough for the small room. 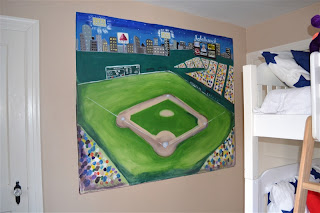 we put my girls old bunk beds in- and I painted Fenway Park on the wall- we all worked on it together.
My sister in law and my daughter picked out great  stuff at Ikea- rug, bedding,accessories  and fabric for curtains- all in red white and blue. 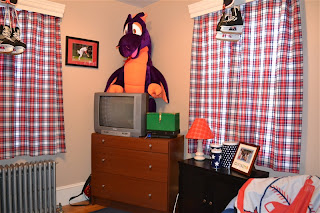 Installed our older tv with Playstation 2- the boys will be so excited when they see it!
Posted by Sally Dean at 4:20 AM 3 comments: 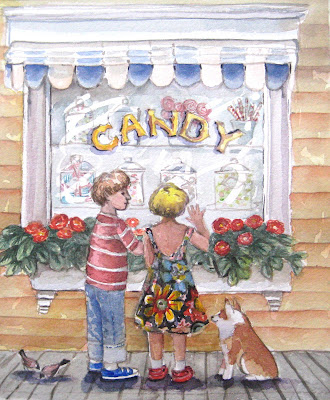 I had so much fun painting this for my painting challenge.
It's supposed to be about glass,so I chose a glass window filled with jars of candy.
I don't think it is really about the glass, but I featured it .
Painting this makes me want to do more illustration type of work!
Posted by Sally Dean at 6:14 AM 4 comments:

study for my challenge painting 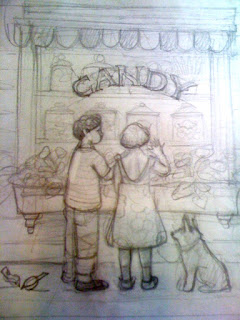 badly photographed drawing for my "glass" challenge- will post the painting tomorrow.
Posted by Sally Dean at 6:08 PM No comments: